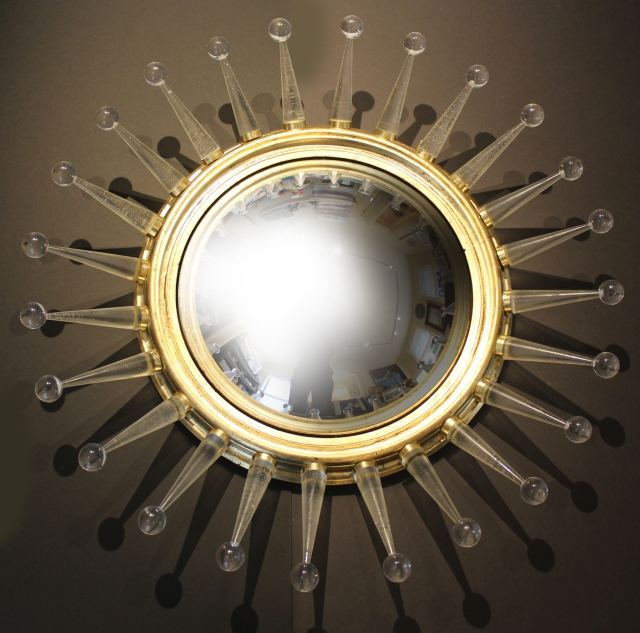 This is a convex mirror created from an old funky round frame I found at a Paris flea market.  It sat around for years before I could figure out where to take it.

I refinished the frame and gilded it.  I then made a silicone mold from cone shaped carved soapstone and made the spikes that flare out from the frame.  Each is topped with an acrylic sphere.

I was inspired by the old, grand movie palace in San Francisco named the Coronet.  Its where I first saw Star Wars and the theater had a modernist Camelot vibe that I thought was beautiful.  Unfortunately the theater was torn down and has been replaced with a retirement community.  So I named this mirror in tribute to the swooping, sputnik,  knight-and-fair-lady theater that stood there.

The mirror measures about 29 inches in diameter.

My Mona is News! 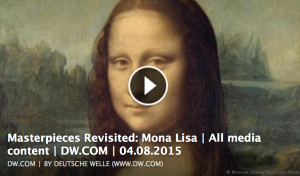 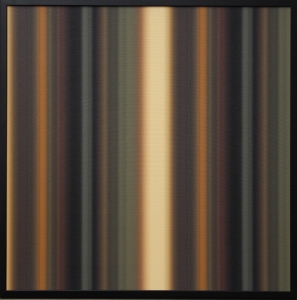 My Mona Lisa ombré abstraction is part of a new series called “Masterpieces Revisited” on a European station called euromaxx.  Check it out at 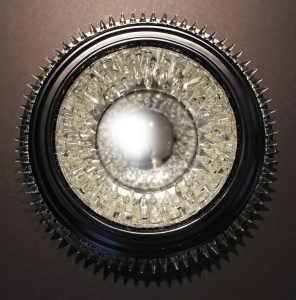 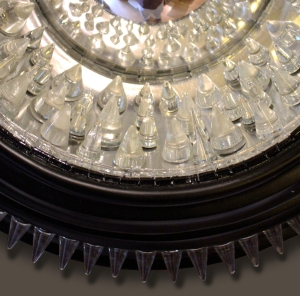 My new convex mirror that I’ve named Ascension.  The wood frame itself is hand turned wood and lacquered black.  I silver leafed the interior curve and embellished it with small crystal resin cones of various sizes.  Of course, I made the cones. Some are tipped with a bit of glass. The convex mirror is a true half dome which reflects the cones in a wonderful way.

The final piece reminds me of dahlias or chrysanthemums in full bloom. Or the burst of a monstrance or firework. 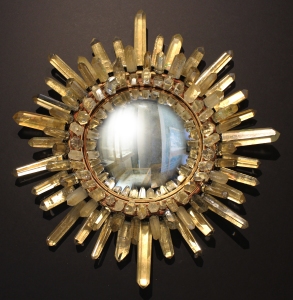 This is my new convex mirror that I’ve named Gloriana.  It measures 22 inches tip to tip.

Its made of hand cast resin quartz crystals.  I gilded the back of each crystal to provide a reflective surface and unify the colors. 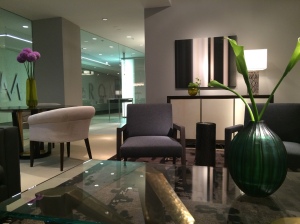 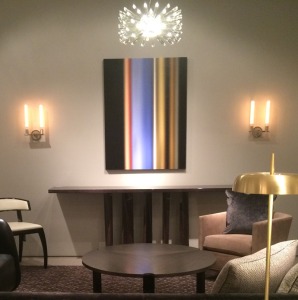 Two of four of my ombré abstractions hanging in the Bright Showroom in Chicago.  These are Whister’s Mother and Vermeer’s Girl with the Pearl Earring.  These were commissioned to hang for the current Neocon.  And beyond.

The Bourbon Dynasty Massed On A Wall 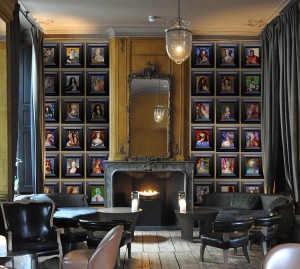 Here is nearly all my Bourbon Dynasty lenticulars massed onto a wall.  All your favorites are here from Henry IV( rumored to smell like a goat) to Philippe d’Orleans( the brother of Louis XIV who was a flaming gay guy) to Marie Antoinette( All her style could not protect her from the scaffold).

These are for sale and would be wonderful in a restaurant or an elegant bar….There are 42 of them!

This is my new Black Pearl Mirror.  Its named for obvious reasons given the pearls lavished on it.  Its all hand made and the pearls are finished with an iridescent lacquer.  The frame measures 18 inches in diameter. 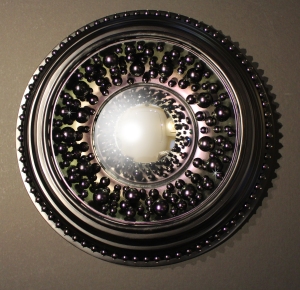 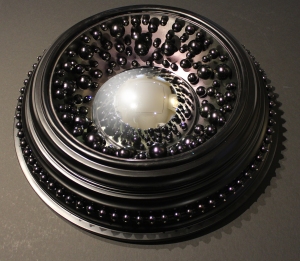 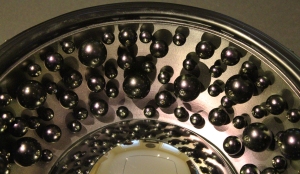 Here’s my new mirror which is a fantasy on the Bollywood aesthetic.  Its a deep frame and I have attached lenticular panels depicting Hindu gods in all their Technicolor splendor onto the curves.  Its fun to watch the images morph from one to another as you pass the mirror. 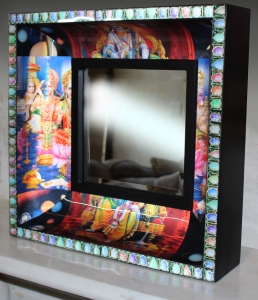 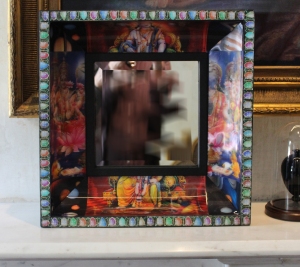 My new convex mirror named after the ceremonial object that is used in a Catholic mass to hold the Eucharist.  This shape has been used for hundreds of years and is probably the original inspiration for the thousands of sunburst mirrors on the market.

Mine is made from a handmade, ebonized wooden frame and is covered with a mosaic of hand-blown glass rods from Murano.  The rods are cut then glued onto a ground of silver leaf.  The mosaic is secured by a coat of clear resin. The spikes making the “burst” are made of plexiglass.

The mirror is about 30 inches in diameter. 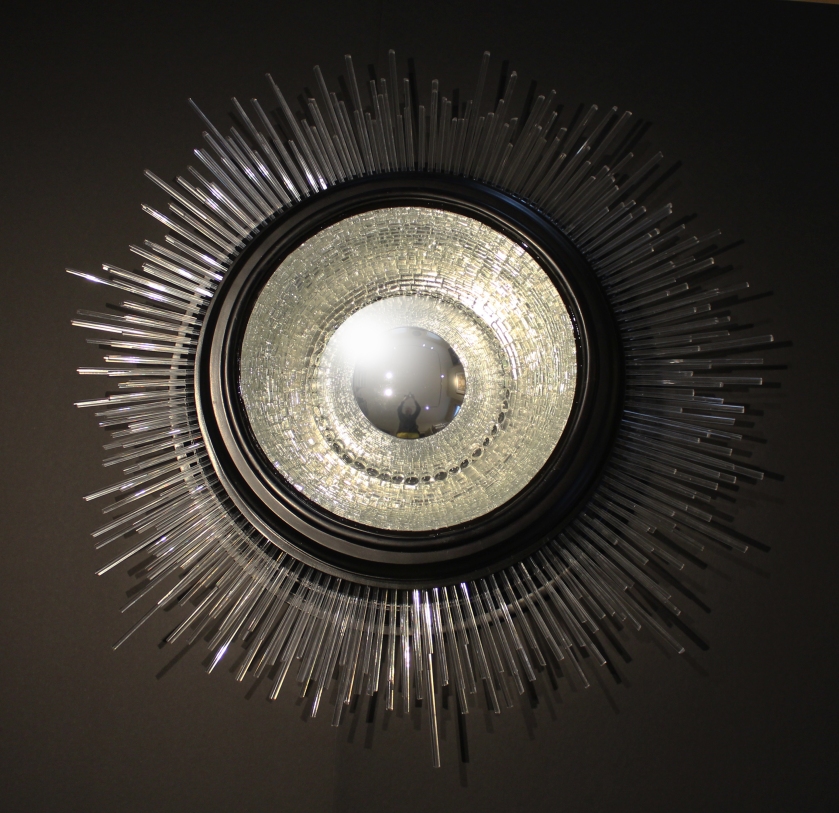 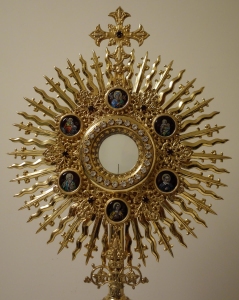 One of Bruegel’s masterpieces seen by millions.  I have re-worked this iconic painting as part of my ombré series. 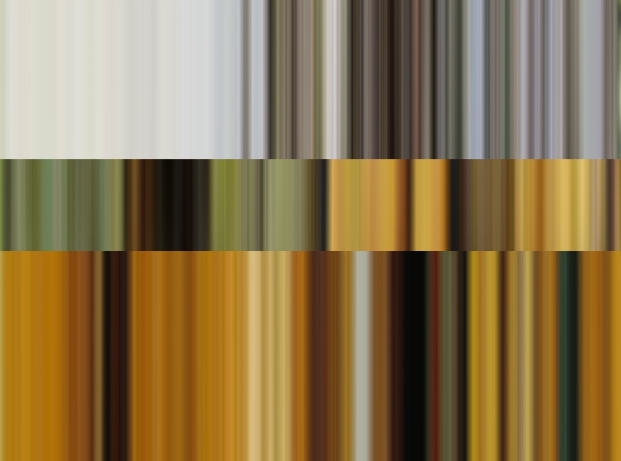